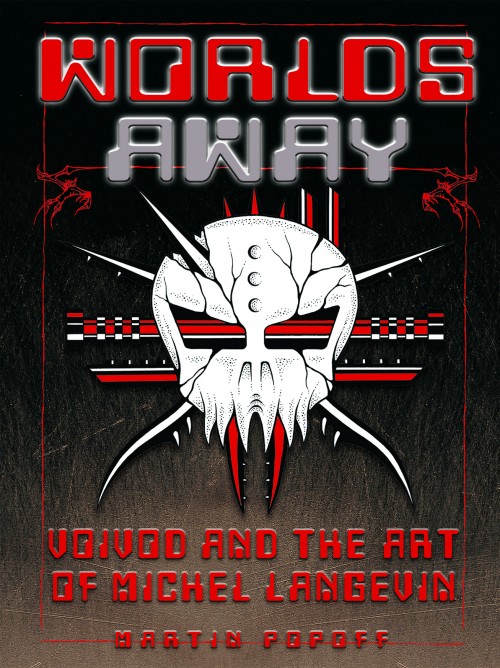 Worlds Away: Voivod and the Art of Michel Langevin

Dudes, do not hesitate if you want this. It's limited to 3000 copies, and is so gorgeous and yummy and intellectually substantive, stocks won't last long.

The book is hard cover, large 9" x 12" format, full colour throughout on premium stock, laid out and printed expertly by the same team who did my book on Derek Riggs. Hundred and hundred of killer artworks are scattered throughout the book - loads of them previously unseen, loads of them explained and contextualized for the first time... we're talking from the '70s on.

I've written it very similar to the way I did the Riggs, but the bonus is that you can consider it a bit of a Voivod biography as well. The different eras of Michel's art are linked to the records at the time, and I've used footage from extensive new interviews with Michel and Snake as well as my previous archived chats with them, as well as with Piggy, Jason Newsted, Eric Forrest, Dave Grohl, plus other rockers Michel has inspired, influenced, or even did art work for.

For those who need a refresher on Michel, here's a quote from Phil Anselmo:

"Drummer extraordinaire known as Away, of the masters of Intergalactic Warcore Voivod, is the band's artistic visionary, and his brand of art complements and refines itself with each LP in perfect accordance with the band's different themes and musical growth. From chaotic, battle-ready skull-faced warriors, to his technically intimidating mecha-space stations ruling a star-dotted world of his own invention, his foreboding odd caricatures wander across landscapes on another planet, in another galaxy. Somehow his artwork depicted the music you were hearing - and the feeling it gave you while staring at Away's album cover artwork - like an extraterrestrial concoction exploding in your head and hurtling you through space in an escape pod, heading to another spider-spinning sandy dimension that only Away and Voivod could invent."
Philip H. Anselmo (and the H stands for Hatross)

Lemme tell you, Michel is a very cool dude, intelligent, with interesting stories behind both the music and the heavily-relating artwork. Plus of course, he's an amazing artist. This is a righteous tome, and - very satisfying to me - it achieves a life goal for Michel with respect to seeing his life work in art book form.